A 6.5 MMTPA refinery in India, processing a mix of Kuwait, Arab Medium, Arab Mix, Upper Zakum and other crudes through a double stage desalter system, was unsatisfied with the desalter performance. The poor dehydration and salt removal created corrosion concerns in the OVHD and energy penalties in the crude furnace. Due to the desalter performance issues, the refiner put the chemical treatment business to competitive tender.

SUEZ was subsequently awarded this business based on the strength of the product portfolio and SUEZ’s strategic plan to help the refinery reduce the total cost of operation.

SUEZ started the desalter treatment with a traditional oil based Embreak demulsifier and achieved the primary goals of performance improvement, in terms of both salt removal and brine quality.

Concurrently to the implementation of the new program at the refinery, SUEZ had been developing new novel water based demulsifiers.

The primary goal for this new technology was to reduce the cost of treatment while maintaining the performance of traditional oil based demulsifiers. The new SUEZ water based demulsifier was a product of a multi-year research effort and represents a significant advancement in treatment technology.
The chemistry was thoroughly tested in laboratory simulations on the refinery’s crudes slate, and found to be superior to the current SUEZ oil based demulsifier at a projected cost reduction of ~ 20%. SUEZ subsequently offered the new Embreak chemistry to the refinery as part of the strategic plan to reduce the total cost of operation.

The desalted crude salt BSW was monitored and a comparison in performance is shown in the following figures. Overall the results were superior with the new Embreak technology; the desalting and dehydration efficiency was improved by 23% and 35% respectively. 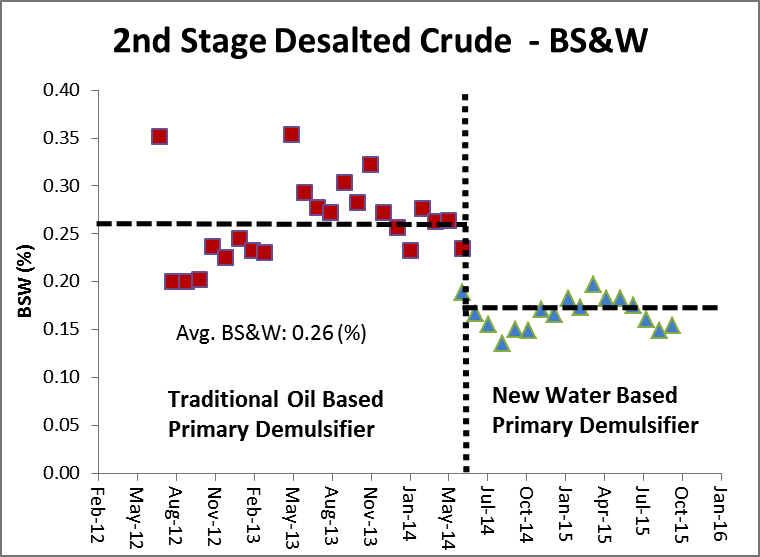 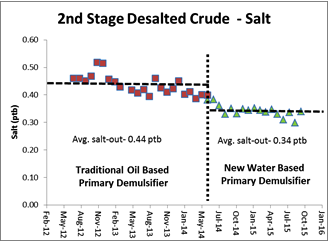 The implementation of the new water based product was successful in improving performance and reducing cost.

The brine quality was also improved based on visual observations and reduced frequency of upsets.

Improving the performance was a requirement for the success for the trial. Reducing the cost for the treatment was the key to on- going business and met with SUEZ’s new Embreak technology. The cost to treat was reduced by ~ 35% which exceed the intial projection of 20%. 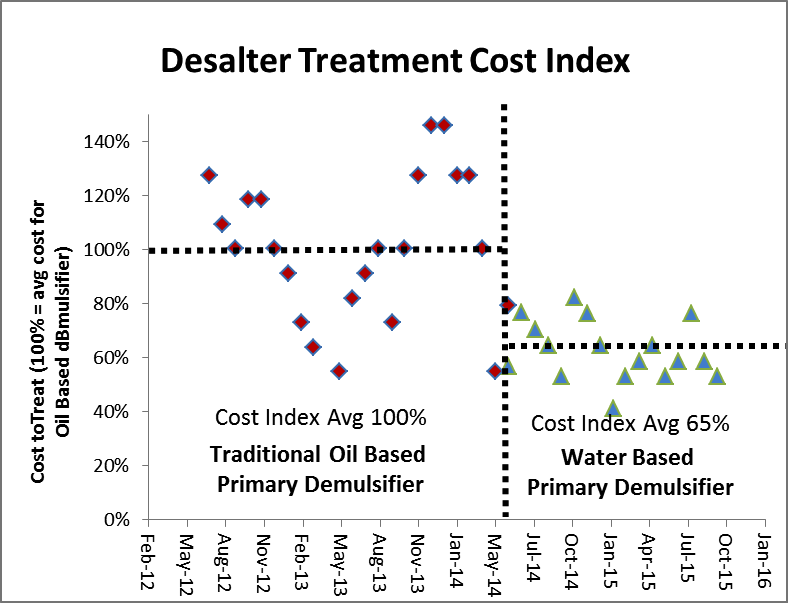