SUEZ’s ROBIN plant produces local, green, sustainable and competitive energy from non-recyclable waste wood to supply the 15 sites on the Roussillon chemical platform and to support them in their energy transition.
The mission

The Roussillon chemical platform is the largest of its kind in France. The site hosts 16 specialised chemical companies, including a number of the sector’s giants, such as Novapex, Blue Star, Adisseo and Solvay.

In 1999, the site created the Osiris GIE (economic interest group) and set some ambitious objectives: to cut the site’s CO2 emissions by 20% by 2020 and to consume at least 20% of renewable energy, including biomass, to produce steam for the industrial companies.

As part of its bid to protect resources, the GIE called on a number of environmental specialists, including SUEZ, which had already be active on the platform for several years.

In an effort to reach its objective of diversifying its energy resources and cutting its consumption of fossil energies, in 2014 the GIE formally asked SUEZ to support its energy transition by signing a 15-year contract.
1.2
TWh/year
the platform’s initial gas consumption
-20
% CO2
the platform’s objective for 2020
150
hectares
the total surface area of the site
Our solution

SUEZ proposed to improve the platform’s carbon balance and energy consumption by building a unit to produce green and renewable energy. This new facility created a number of significant opportunities for the GIE.

Recovery of non-recyclable resources from woodland biomass, non-recyclable paper or waste wood (non-hazardous wood and treated wood), which was previously buried or unused. Based on a circular economic model, the recovery unit can transform 50,000 tonnes/year of biomass made up of several families of unused waste into a resource:

This biomass waste is collected mainly in the Auvergne Rhône Alpes region, in a 150 km radius around the site, thereby increasing the environmental benefits of the process. 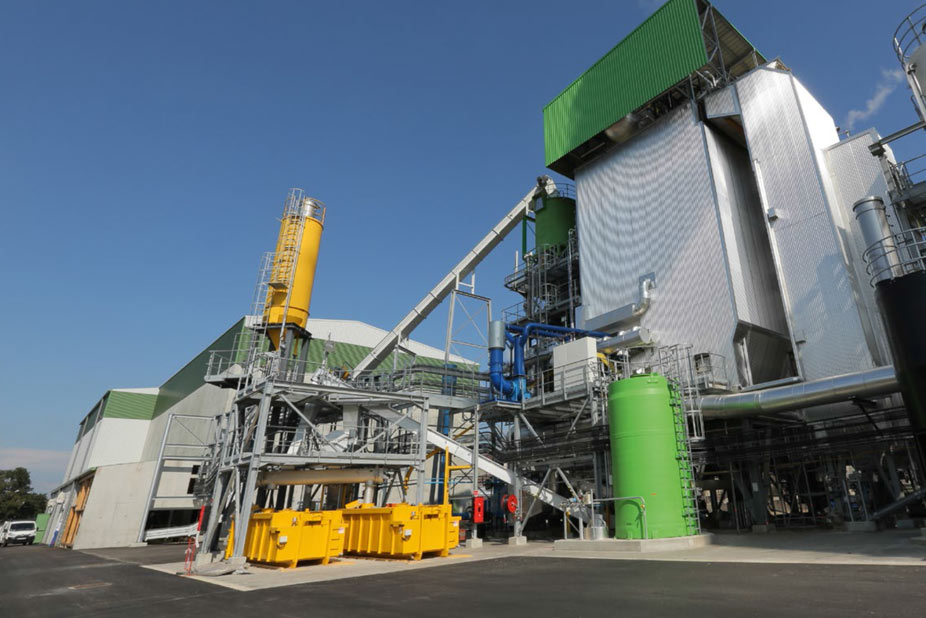 This technological option optimises the efficiency of the steam production. More than 85% of the energy contained in the fuels is transformed into clean steam, representing a power of production of more than 21 MW. By producing 30 tonnes/hour, the plant covers 15% of the energy needs of the platform, which consumes 180 tonnes/hour.

Treat the plant’s fumes to improve emissions into the atmosphere

Since the fumes produced by incineration are acid and loaded with polluting agents, they are treated in two steps:

A sustainable and competitive partnership

Robin Roussillon is SUEZ’s first plant capable of accepting several types of wood (biomass and waste biomass). It is also the first waste-to-energy plant using soiled wood to be subsidised by the ADEME (France’s environmental and energy management agency). The wood-fuelled plant also represents a premier in the chemical industry in France, where major energy needs are usually met using other sources.

A sharp improvement in energy and environmental performance

SUEZ has helped the platform to increase the proportion of renewable energy it consumes, while rising to the challenge of protecting resources. This contract has boosted industrial companies’ competitive performance, because the unit now also contributes to the achievement of the environmental performance objectives:

What are you looking for?